Derek Whiteley lives in Wardlow, in the Peak District’s White Peak area. He is married to Sarah Whiteley, a former Peak District National Park conservation archaeologist, and they have a daughter, Phoebe. Derek is a life member of the Derbyshire Wildlife Trust, National Trust and YHA, and a Fellow of the Royal Entomological Society.

Derek grew up and was educated in Sheffield, and has been recording wildlife in the Peak District National Park for over 50 years. At 15, he joined the Sorby Natural History Society, where he learnt the importance of observing, identifying and recording what he found. Older members became his mentors and tutors, as he progressed from birdwatcher to naturalist to ecologist. 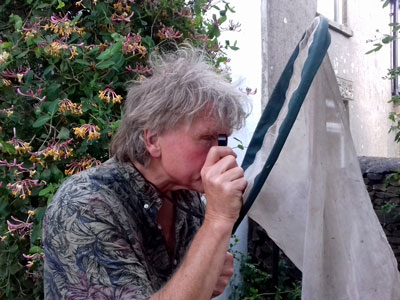 A Sorby Trustee for 48 years, president four times, general secretary, treasurer, recorder, and secretary to various groups, Derek has edited the Sorby Record (Journal of Natural History for South Yorkshire and the Peak) for 47 years. He is secretary of Sorby Invertebrate Group (SIG) organising field meetings to record Peak District insects and other invertebrates, and identification workshops to train the next generation.

After graduating from Sheffield University, he worked at Weston Park Museum for 25 years, then Sheffield City Ecology Unit for 18 years, retiring in 2018. During those years, he developed Sheffield Biological Records Centre from a set of museum index cards to a fully digitised database with hundreds of thousands of records.

Throughout five decades of work, Derek has looked at the distribution and ecology of less popular groups of natural history, neglected by mainstream naturalists. In the 1970s, he started a mammal atlas scheme, collaborating with the late Derek Yalden. In the 1980s, he specialised in bats when very little was known about local species. At the same time, he was looking at less popular insects - hoverflies, soldier flies, snail-killing flies and various beetle groups, and running atlas-mapping projects for popular groups such as butterflies and dragonflies.

He has authored and co-authored dozens of books and papers on mammals, hoverflies, reptiles, amphibians, bats, butterflies, dragonflies, beetles, snails and millipedes relating at least in part to the Peak. He has published two atlases of local butterflies, 23 years apart, showing remarkable changes in species distribution. In 1988, he founded a journal (Dipterists Digest) to disseminate information about identification and ecology of Diptera (true flies) - it is now the national journal of the Dipterists Forum. He is currently writing a book about Peak District invertebrates.

Derek explains: “They are all significant species within the National Park and are suitable for citizen science participation. We need to know exactly where they are and what their requirements are so that land managers can make the right decisions.

"Collecting data for research is fascinating, but if the data can also be used to influence land management for the benefit of species, then I am a happy man. Dead wood, rot-holes and fungus heart rot is a good example. Forty years ago it was unfashionable to leave standing and fallen dead timber, it was regarded as a nuisance to be cleared away or burned, now it is widely accepted as an important resource for biodiversity." 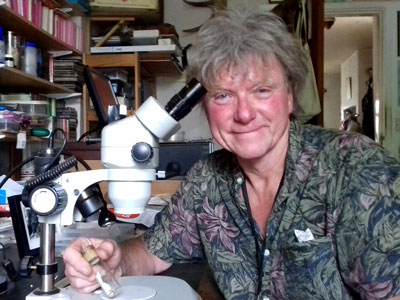 Derek once had 36 people standing on the road island near Bakewell Bridge watching Leisler’s Bats feeding round the street lamps.

He once taught a Sheffield University course on “Mammals” at Bakewell, when adult students were encouraged to skin and preserve road kills as museum specimens.

He has identified and logged the remains of over 6,000 small mammals that have died in discarded litter (bottles and ring pull cans), and co-authored a paper with the late Dr Derek Yalden on the subject.

During the time of the Covid-19 pandemic, he examined over 1,500 limestone walls for lapidary snails, recording them on 173 occasions.