George Challenger – local historian, naturalist and former National Park landscape architect who led on the creation of the Trails

George Challenger worked for the National Park from 1966 to his retirement in 1995, and he actively volunteered with a number of organisations until he died in 2021, aged 84.

Arriving in Bakewell in 1966, George worked for the National Park as a landscape architect, initially, drawing on his postgraduate diploma in landscape design from Newcastle University, and his previous experience with the government’s agricultural department in Rhodesia. He studied town planning with Trent Polytechnic, in addition to his work.

Until 1975, George was involved in many projects which helped establish the young National Park Authority (or Peak Park Joint Planning Board, as it then was), as a pioneering force among British National Parks. Significant infrastructure sites, which we now take for granted in the Peak District, such as the Tissington and High Peak Trails and many visitor car parks, including Bowden Bridge car park at Hayfield and Tideswell Dale car park, were developed by George. 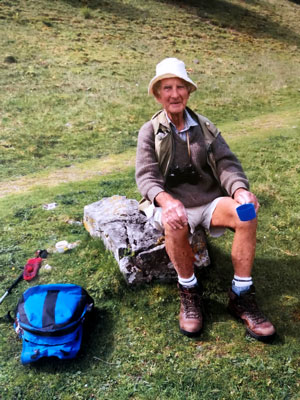 During the 1970s, large scale open quarry faces presented a real challenge in landscape terms in the National Park, George urged their restoration to more natural daleside landforms. His idea was taken up by colleagues, developed and put into practice at quarries including Tunstead, Stoney Middleton and Ballidon. It resulted in much research and its adoption as a widespread restoration technique. The photograph, from 2010, shows the daleside treatment at Old Moor quarry (part of Tunstead) on the then top lifts of the quarry face; over time it will continue down to the eventual quarry floor. 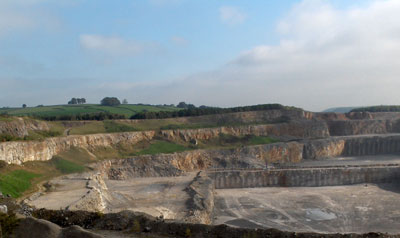 Throughout his career George continued, in particular, to champion the cause of the spectacular flower-rich grasslands of the Peak District’s limestone dales, and the need to safeguard them against the continual threat of encroaching scrub.

By the mid-1980s, George was leader of the Heritage Group, perfectly combining his twin interests of local history and natural history. Under George's leadership the staffing and influence of the Heritage Group grew, and both ecology and archaeology became more central to the National Park’s work, a legacy that will continue to benefit the National Park and all those who enjoy it for many years to come.

Outside work, George was a keen naturalist, his interest in plants being particularly evident. George not only took great pleasure from local wildlife, but also enjoyed sharing that pleasure with others. Former colleague National Park ecologist Rhodri Thomas remembers receiving e-mails from George providing an update on how the local lapwings on Bakewell Showground or Haddon Fields were faring, or news of his latest botanical discoveries.

And not only did George enjoy spending time appreciating the natural world, but he also gave back as much as he took from it. He was an active member of Derbyshire Wildlife Trust for nearly fifty years, spending many voluntary hours leading working parties at Millers Dale Quarry nature reserve, where rare species such as bee orchids have benefitted from the work of George and other dedicated volunteers over many years, and continue to delight visitors.

George’s hands-on conservation work combined his horticultural qualifications with his interest in wildlife. The charity Plantlife acquired Deepdale Nature Reserve in 1999. George had a keen interest in the plants found there and he was actively involved in scrub clearance and protection of rare plants. His garden is a treasure trove of scarce wild plants grown from seed and fortunately he had the foresight to catalogue it his wild plant collection. Some are now in the wildflower courtyard at the National Park office, where they will provide a secure seedbank for future conservation projects; others have found new homes in the wild, and indeed some species such as meadow-rue, (collected as seed by George from the banks of the River Wye, and grown and planted out by Meaden Bridge, where it continues to flourish), owe their continued existence in the National Park to George. The seeds George has collected from several nationally rare plants have also been sent to Kew Gardens at their request, where they provide a legacy for the future.

Over the fifty years that he was a volunteer at Bakewell Historical Society's Old House Museum, George was involved in every aspect of the running and maintenance of the building. He was chair of the museum committee for many years and displayed a deep knowledge of the history of the Old House, details of the building and its former tenants. His tireless commitment over the years meant that the museum has continued to thrive.

George was involved with Caudwell's Mill at Rowsley too, from the time the National Park Board got involved in trying to protect the building and keep it going as an historic flour mill. George became involved in the charity, which was set up to run it, and continued to help Rowsley Primary School with a garden there for the rest of his life. 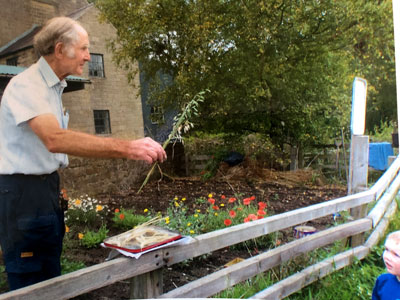 George also headed the small working group on the Bakewell Neighbourhood Plan chapter on ‘Environment & Conservation’. With his comprehensive knowledge and thorough determination, he almost single-handedly put together the text and policies in incredibly fine detail, and defended them vigorously through repeated drafts, meetings and public exhibitions. He worked from very early in the mornings - emails timed at 5:30am were common! 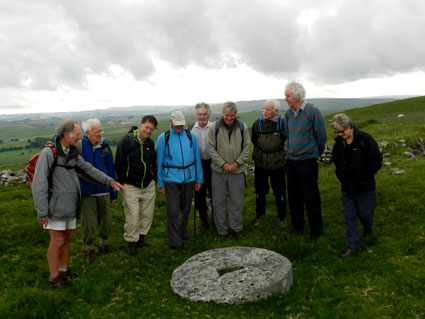 George was well-known for sharing his extensive knowledge in a generous, unassuming and understated way. He was always calm, placid and reassuring, his calm and polite manner were one of his hallmarks. It is a remarkable testament to George that, in all the time colleagues knew him, he was never seen to be angry or raise a voice to anyone, despite some trying situations. One described him as "a quiet, unassuming man but the projects from his early years are still there, [such as Trails and visitor car parks], long established and taken for granted."

Throughout his fifty-five years living in the Peak District, George contributed to the environment and local history in so many ways. We will all continue to benefit from George's dedicated work for the Peak District National Park, both paid and unpaid, for many years to come.