Archaeologist and author John Barnatt is renowned for his work above and below ground in the Peak District National Park. Through his work as the survey archaeologist for the Peak District National Park Authority (1989 to 2016), John has surveyed and reported on the remains of past human activity he found on farmland, moorland, historic estates and underground in mines. Although retired now, he has left behind a treasure trove of information in the form of archived farm survey reports and plans, together with numerous publications.

First introduced to the National Park by his parents who were keen walkers, John developed a lifelong love for the area: "What I love most about the Peak District is its contrasts - in ten minutes you can be in a completely different landscape. The National Park is one of the few places in the UK where such variety occurs together in one protected area.

"It’s not just the contrasts between the Dark Peak and White Peak that all are familiar with, it's also the obvious differences between the shale valleys below and the moorlands above that are important - what you see has been shaped by people in different ways over the last ten millennia, to create wonderful contrasts." 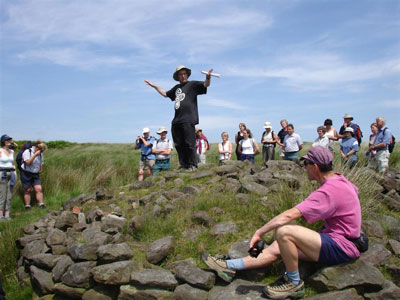 The White Peak is John’s favourite landscape area because the stunningly beautiful drystone walls and field patterns they create reveal evidence of medieval farming through to later periods of enclosure, and much more, including prehistoric monuments and many historic lead mines and quarries. John says: “Being largely pastoral, this is landscape-scale archaeology that you can see without having to dig to reveal it.

"An extreme contrast is Kinder Scout, in the Dark Peak, which also isn’t as nature intended; it looks the way it does because of the influence of people over time - removing the trees, grazing their animals there - that led to it being as it is."

John's eye for landscape and his drawing skills have been influenced by his Fine Art degree and early career as an artist and art lecturer. He trained at Rotherham and Kingston upon Thames art colleges, so his route into archaeology was not conventional. John says: "I started out as a practicing artist, interested in the monuments of prehistory - stone circles, burial mounds, chambered tombs and so on - and I had always been passionate about understanding what was going on in the landscape. For me there is no great difference between fine art and archaeology as through both disciplines I have sought to make sense of the land we inhabit."

As an artist in his twenties, John examined alternative ways of viewing land. He looked at stone circles and other prehistoric features, and in particular at their geometrical layouts and astronomical alignments. In 1978, he wrote his first book, Stone Circles of the Peak, presenting his investigation of theories put forward by Professor Alexander Thom on prehistoric geometry and astronomy. John’s natural progression was to extend this study across Britain but he needed petrol money to do so. He wrote to the Archaeology Department at Sheffield University and was invited in for a chat that, to John’s surprise, resulted in him becoming a funded student again in his thirties, eventually completing a PhD on the design of stone circles. This life-changing course of events led to John meeting Ken Smith, archaeologist at the then Peak Park Joint Planning Board (forerunner of the National Park Authority) and to John’s employment within the Peak District, first on a Manpower Services Commission scheme (1983 to 1985) and, from 1989 to 2016, as the survey archaeologist for the Park. 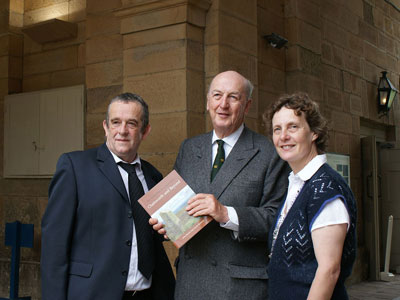 It was John's task to find new archaeology and find out more about the archaeology that was already known. His post was unique across UK National Parks as this was his sole focus. Much of the survey work took place on farmland under the farm grants scheme administered by the National Park; the surveys identified features that could subsequently be looked after by farmers.

Later, John’s survey skills were utilised to generate enough income to employ another archaeologist to do the farm surveys whilst John moved on to larger projects, for instance surveys of the Chatsworth and Haddon estates; the Edale and Goyt valleys; and the production of the Lead Legacy report. John also completed joint survey projects on the Eastern Moors with the Royal Commission for Historic Monuments in England (RCHME) – these comprised surveying 1 square kilometre at Gardom’s Edge, and 2 square kilometres on Big Moor, measuring and plotting all monuments and ancient settlement remains to within 10cm accuracy on the ground.

In addition, John has conducted several excavations in the Peak District National Park including at Eaglestone Flat where a farmer digging a land drain exposed a prehistoric pot containing human remains. This work led to the identification of a Bronze Age cremation cemetery. And, there was a five-year public archaeology project at Gardom’s Edge, 1995 to 2000 done jointly with Sheffield University, which engaged with hundreds of volunteers and was very successful in promoting public interest in Peak District archaeology. Subsequently, John co-wrote An upland biography: landscape and prehistory on Gardom’s Edge, Derbyshire with Bill Bevan and Mark Edmonds (published by Oxbow Books, 2017).

John is passionate about passing on information and enthusing other people, whether on guided walks, in lectures, or in articles and books. For John, it’s not just the big spectacular sites like Arbor Low that are especially exciting, he loves the details held within the landscape as a whole – the stiles, sheep creeps, ridge and furrow - and interpreting these features to reveal its story. He sees the landscape as a palimpsest of older and newer features all fitted together. Two of his books encapsulate this approach: Landscapes Through Time (published by English Heritage, 1997)), which John co-authored with Ken Smith; and Reading the Peak District Landscape (published by Historic England, 2019). The latter John describes as being his swansong as it describes what he learnt from 27 years as the National Park's survey archaeologist.

Another recent book by John, The Archaeology of Underground Mines and Quarries in England (published by Historic England, 2019), captures his knowledge of researching and recording underground archaeology. His passion for mines began in his teens as a caver, resumed following a knee injury in his thirties, which prevented him running. This coincided with meeting Jim Rieuwerts of the Peak District Mines Historical Society and striking up a friendship that saw them exploring many miles underground. Much of the work that led to the book was done in John’s own time and published in Mining History. However, this specialist knowledge saw Historic England commission a report from the National Park Authority, authored by John, about the conservation of underground mine archaeology. 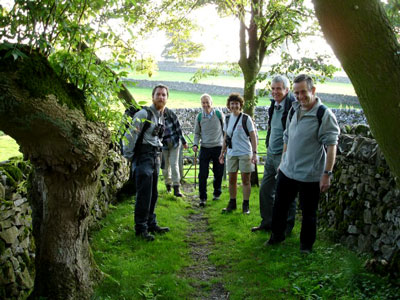 Looking to the future, John says: "I spent a working lifetime going where I could get access to but about half of the National Park area has not been adequately surveyed as yet, so there are still huge amounts of archaeology to be found. It’s like painting the Forth Road Bridge: you can see new things missed previously, or you go back to find sites have been destroyed or altered.

"Archaeology has changed its perceptions over the years, each generation asks questions that are shaped by the experience of their present, so new generations ask new questions and are interested in things that others have not thought of before.

"And, there are significant challenges for the next generations of archaeologists - global warming, changes in farming practices, rewilding. Letting land return to nature is not necessarily good for archaeology; tree roots do damage and trees make features hard for the public to find. Being idealistic, I would like to see farming geared towards looking after the landscape and farmers grazing animals to keep some of the landscape character open rather than fully shrouded by trees.

"My fear is that as people are realising climate change is real, the emphasis will change to solving it and to ecological solutions, but I don’t want archaeology to be overlooked. I hope young archaeologists will speak out for it and for people to see understanding the past as part of the solution for the future."