A young man with a passion for the countryside, Benny Rothman was just 20 years old when he led hundreds of ramblers on a history-making mission... the Kinder Mass Trespass.

He was one of six people arrested – and one of five jailed – for his role in the Trespass. The harsh sentences unleashed a wave of public sympathy and fuelled the right-to-roam movement, which ultimately led to the creation of the UK’s national parks.

Benny was born on 1st June 1911, in Cheetham Hill, Manchester to Romanian Jewish parents who had come to Britain at the turn of the century.

The family was very poor and, though Benny won a scholarship to Manchester’s Central High School for Boys, he had to leave at the age of 14 and start work as an errand boy in the motor trade. He went on to become a trainee mechanic, studying geography and economics in his spare time.

He became an outdoor enthusiast at an early age and, by 1932, he was the Lancashire secretary of the British Workers' Sports Federation (BWSF), organising walks and cycling trips for young workers from Manchester and surrounding mill towns.

Inspiration for the Mass Trespass grew out of a BWSF camp at Easter 1932 – during which a ramble to Bleaklow was cut short by a confrontation with gamekeepers. The ramblers were turned back but, back at the camp, they discussed how different it might have been if the gamekeepers had been faced with an army of factory apprentices.

A BWSF rally in Hayfield was called for 24th April – but this was a diversion, drawing in one third of the Derbyshire police force, which expected Communist unrest. Meanwhile, trespassers met at an old quarry, with Rothman addressing hundreds of ramblers before they set off. 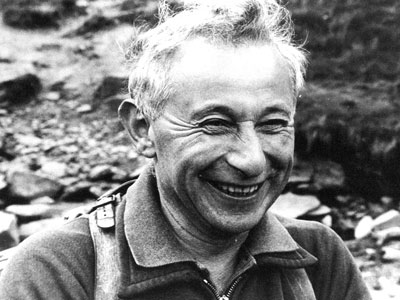 "There were hundreds of young men and women, lads and girls, in their picturesque rambling gear: shorts of every length and colour, flannels and breeches, even overalls, vivid colours and drab khaki…multi-coloured sweaters and pullovers, army packs and rucksacks of every size and shape." – Benny Rothman, speaking in 1982, recalling the moment he addressed ramblers before setting off on the Mass Trespass.

At William Clough, trespassers were confronted by gamekeepers and scuffles broke out. A gamekeeper was injured. The trespassers broke through, running through prohibited land to Kinder plateau and meeting up with ramblers from Sheffield from the 'other side'.

Trespassers agreed to walk back to Hayfield 'with heads held high' – but police were still there, waiting to make arrests.

The arrested ramblers were:

All were charged with unlawful assembly and breach of the peace. They pleaded not guilty and were remanded to be tried on 7th and 8th July at Derby Assizes.

Mendel was found not guilty, due to lack of evidence against him.

The others were convicted of riot. Prison sentences were:

Speaking in his defence at Derby Assizes, Benny said: "We ramblers, after a hard week’s work, in smoky towns and cities, go out rambling for relaxation and fresh air. And we find the finest rambling country is closed to us... Our request, or demand, for access to all peaks and uncultivated moorland is nothing unreasonable."

Benny went on to work tirelessly in the trade union movement and remained a rambler, climber and activist throughout his life. He died on 23rd January, 2002.