Dianne has chaired the National Park Management Plan Advisory Group since 2012, overseeing two of the five-year management plans, with the next one (for 2023 to 2028) currently in the process of public consultation.

She says: "I am very interested in both the built and natural environment and I’m very aware of why millions of people want to visit our National Parks. We really do have some of the richest stores of natural beauty and access to it from our doorsteps - that's not the same in some countries where the countryside is not open to the public, and we mustn’t take it for granted. These landscapes deserve our respect and we must preserve them for future generations."

Dianne is an experienced chair, trustee and non-executive director skilled in leading public sector, charitable, and commercial organisations with significant budgets and comparable complexity. Organisations she has worked with include Age UK, NHS, University of Derby, Anchor Trust, as well as the Peak District National Park Authority. She brings high level strategic, analytical, governance, and leadership experience combined with informal, sensitive, optimism. She was awarded a CBE in 2011, has been a Deputy Lieutenant for Derbyshire since 2004, and has been awarded two Honorary Doctorates. Her LinkedIn profile lists that she is an "accomplished communicator and public speaker, balletomane, mad pianist, internationalist, and psychic gardener." 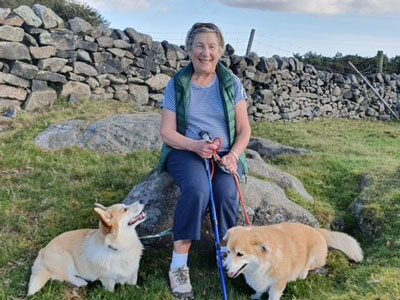 Brought up in Sheffield, Dianne was introduced to the Peak District by her father. Her grandfather had come to Sheffield from Eastern Europe prior to WWI and chose to settle in Sheffield because of its proximity to the countryside, which Dianne’s father described as ‘the wondrous Peak District’. On Sundays and bank holidays they would visit the ‘wondrous Peak District’ and she has fond memories of the open air swimming pool that used to be at the Rising Sun hotel near Bamford, of climbing Kinder Scout, and visiting Matlock Bath many years before the cable cars were installed to carry visitors to the top of the hill. The Peak District felt like a magical place so when Dianne and her own family had the opportunity to live in the National Park she was thrilled. She moved to Eyam in 1982.

"We live in a building originally intended for animals," Dianne says. "It’s a barn conversion and the views are staggeringly beautiful." She recalls a visitor from London once commenting that his wife would be frightened by their views of the countryside instead of buildings and people, which Dianne found hard to comprehend, as she loves seeing the trees, birds, farmland, sheep and hills. In fact, Dianne’s home offers a distant view to Chatsworth House and once mentioned this to the former Duchess of Devonshire who believed Chatsworth was not overlooked by other houses. The Duchess drove over to visit Dianne and see for herself!

Years later, and through her participation in Heritage Lottery work locally, Dianne was invited to apply to chair the National Park Management Plan Advisory Group (NPMPAG). She says: "The most important thing for everyone to understand is that it is a strategic management plan for the place and the people who live and work in it, and visit it. It’s not a plan for the management of the National Park Authority."

Others on the Advisory Group are representatives of organisations and groups, including the Parishes Forum, Land Managers Forum, Natural England, Historic England, National Trust, water companies, Rural Action, Business Peak District, decision makers who work in partnership and collaborate to ensure that shared objectives in the National Park Management Plan are monitored and delivered.

Having previously held chair roles on boards with executive decision-making responsibilities, Dianne wondered how the new position with a purely advisory group of people with diverse interests and with their own decision-making powers, would work out. "Everyone has their own area of specialist interest, but importantly we found that we are all united in supporting the Special Qualities of the National Park and these keep us focused and moving forward.

"Since we started working together, we have refined the National Park Management Plan - it used to be a very long document - and we have identified fewer objectives that the partners can realistically deliver. Its focus is how the delivery partners can help achieve the management plan objectives - the plan for the place, not the Authority."

The Covid-19 pandemic has highlighted mental health issues and these are increasingly coming to the fore. Dianne believes that the Peak District National Park has much to offer people in this respect: "Wide open, tranquil spaces in nature are vital for people to be able to access and this need is increasingly evident. I am so pleased that GPs now have the opportunity to prescribe going for country walks away from towns and cities to help restore people’s physical and mental health. These therapeutic pathways can do an enormous amount of good for people.

"Living in Eyam, historically known as the Plague village for the events of 1666, during the first lockdown in particular, we were very aware of the silence as no-one was travelling about or visiting. That was good for wildlife but we knew it was going to be difficult for people who need to cycle on the lanes or to stand on a hilltop and imbibe the natural beauty and serenity of the space for their physical and mental wellbeing.

"I have seen how important it is to so many people for maintaining our health and sanity through the pandemic and it is amazing how people have stepped up and risen to the challenge of looking after the place too. It’s fantastic that people are able to visit it but visiting comes with responsibilities - it’s important that we welcome people and that everyone understands how to respect and appreciate the place. The new countryside code has been refreshed recently to help people understand what to do."