Chris Dean - head of Moors for the Future Partnership

For nearly two decades, Chris has been head of the Partnership which has rescued the most degraded upland landscape in Europe.

With the onset of climate change this may have been the last opportunity to successfully achieve this.

Chris says: "Nature is far more resilient and powerful than we ever give it credit for. When we started this task 20 years ago, there were many people - often experienced and expert in the field - who doubted the blanket bog landscape of the southern Pennines could ever be recovered.

"There is, however, something in the spirit of some humans who take delight in making something broken work. I have been, and am now, blessed to be surrounded by those sort of people in both my work colleagues and our partners.

"They have not accepted the apparent impossibility of what lay in front of us and have given nature the chance it needed. The difference we have made together was unimaginable in 2002 and I am very grateful to have been part of it." 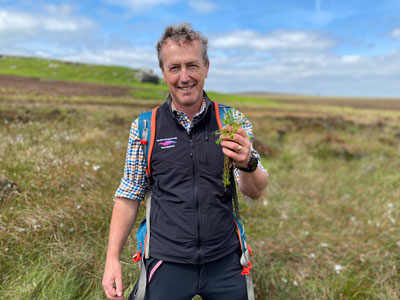 Chris first started work in the conservation sector in 1976 with a job in the Green Belt between Leeds and Bradford - the Tong Calverley Countryside Project.

Ten years later, following a spell with Bradford’s Countryside service and three years at agricultural college, he was in charge of the project, growing it to employ over 50 people.

Chris then moved to a Ranger job with Calderdale Countryside service, where he worked for a decade. During this period he also attended Manchester University part-time, achieving an MSc in countryside management and gaining a taste for upland restoration work across several of the sites that the Moors for the Future Partnership is still involved with today.

After three years with the open access mapping team at the Countryside Agency (now Natural England), covering the Pennines, Chris moved to a new project with, what was then, the biggest Heritage Lottery grant given to landscape conservation, the Moors for the Future Project.

Over six years, this grew into a Partnership regularly running 20 projects a year and winning several awards. The partnership is now raising and investing between £2m and £4m per year, employs 30 people and is preventing more than 65,000 tonnes of carbon being lost from previously degraded blanket bog across 750sq km of its working area.

Chris joined the Peak District National park in December 2002 as a project manager for the new Moors for the Future Partnership.

He was the first person to be employed by the National Park to work for the partnership. With £5 million Heritage Lottery funding, an ambitious project was set up to develop a joined-up approach to landscape-scale conservation which had previously been carried out by individual landowners.

Chris and his Programme Team have grown the partnership to the point where it has raised over £45 million to restore what is an environmental catastrophe of degradation across this blanket bog landscape.

Chris explains: “Over 45km of bare and eroding peat has been transformed and, though there is much still to be done, vast areas of the Peak District and South Pennines are green where they were once bare and barren, like a lunar landscape.

"The Partnership is currently delivering the largest LIFE programme grant ever awarded to a UK conservation project, MoorLIFE 2020. The enthusiasm is showing no sign of slowing down, looking now towards the Nature for Climate fund and corporate and public giving amongst other avenues to keep the trajectory towards a fully restored landscape."

Chris was the main instigator and now Board member of the new Great North Bog coalition, which has brought together six partnerships across the North of England covering 7,000km sq (92% of England’s upland Peat). He is also a director of the Atlantic Isles Europarc, a steering group member of the IUCN UK Peatland Programme and is the Conservation Member for the Trent Regional Flood and Coast Committee.

To find out more visit www.moorsforthefuture.org.uk.