Faith Johnson is an environmental auditor, with over twenty years' experience in the environmental sector. She is managing director of the Environmental Quality Mark community interest company, which supports small businesses to improve their environmental performance and sustainability. Faith is particularly interested in farming methods that balance food production with conservation and carbon management. She lives on a beef and sheep farm in the White Peak, where she has a flock of rare breed sheep – white-faced woodlands – for conservation grazing and high quality wool which she sells to local artists and makers. 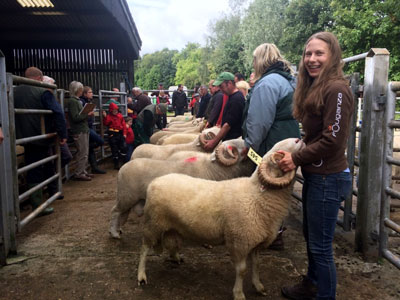 Her love for the Peak District began in childhood thanks to her parents who loved hillwalking. Born in Leeds, Faith grew up in Birmingham and moved to Sheffield to study at university. She gained a BSc in Plant Sciences, and stayed in the city having enjoyed the moors and reservoirs on its doorstep. "I loved studying for my degree, loved it with a passion. I felt privileged to be in a wonderful institution with access to the greatest minds in their fields and I was able to knock on their door and ask them questions."

Faith particularly loved the research element of her degree and considered doing a PhD, but instead, she started working for an environmental engineering company that was using reedbed technology. "Using wetlands is a great eco-friendly way to treat waste water and this work enabled me to apply the learning from my degree to water treatment and contaminated land remediation." Whilst working there, Faith gained professional qualifications with the Institute of Environmental Management and Assessment (IEMA). Faith succeeded in enabling the reedbed company to achieve the ISO140001 - the international standard for environmental management.

By 2004, Faith was working in the property sector undertaking due diligence for pension companies looking at the environmental risks associated with their investments but felt she was not using her skills to the best advantage for the environment. At the same time, the Peak District Environmental Quality Mark (PDEQM) - the first of its kind in England - was being developed by the National Park Authority's Ken Parker with the Countryside Agency, and the project officer role was advertised. The first successful applicant was Victoria Coates who advanced the PDEQM work but unexpectedly had the opportunity to move to Alaska. Faith re-applied and got the job.

The PDEQM is an environmental accreditation scheme; the Peak District National Park Authority's award for businesses that support the local economy; protect the global environment; protect and enhance the local environment; invest in people and communities; and celebrate what’s special about the Peak District. Organisations that successfully achieve the award get to use of the PDEQM logo, which differentiates their products and services, making them stand out as  an environmentally responsible option. 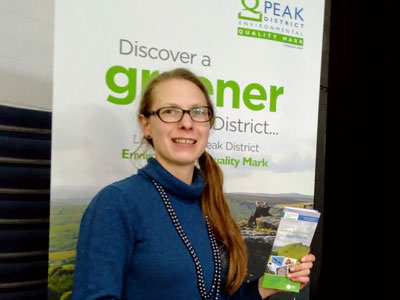 Faith says: "I joined the National Park Authority at an exciting time as I was able to conduct the first audits against the EQM standards and recruit the second group of businesses into the scheme. It was a huge learning curve but I felt I had found the right place to be - working to protect the National Park and the environment, bringing in different elements of ecology and cultural heritage, but also minimising energy, water and waste - it brought together everything I had grown up with at home, studied for and worked towards.

"We were also way ahead of the curve - we'd been helping businesses reduce energy use since 2003, but in 2009 the EQM scheme developed carbon footprinting tool for farmers participating in the scheme and did a pilot study that was shortlisted for an environmental industry award."

Faith's mother is an active environmental and social justice campaigner and is at the root of Faith's passion for sustainable development, conservation, fair trade and ethical consumerism. Faith says: "Growing up I browsed my mum’s magazines from Friends of the Earth and Greenpeace. Mum was involved with the United Nations and I remember the Bruntland Report ‘Our Common Future’ coming through the post when it was first published and sitting with Mum reading it. This was the seminal UN report that proposed long term environmental strategies for sustainable development.”

"I have always had the conviction that there really is no other way of doing business, sustainability is the only solution. It makes no sense to deplete the resources you rely on. Good business needs a strong economic basis but you need to invest in your people and environmental reserves need to be protected and plentiful for the future."

"Sadly, there are still people who don't see this. But I am fortunate to work with lots of amazing businesses that wholeheartedly embrace sustainability, and others that are keen to make positive changes but perhaps don’t know how to go about it. Which is where the EQM comes in - we can work with organisations to be engage, inspire and empower them to act to protect the environment and be sustainable more widely."

National Parks in the UK are not owned by the government or the National Park Authority - these areas of protected land are owned by private individuals, businesses and other organisations. The role of the National Park Authority is to persuade these to manage the land in ways to protect wildlife, conserve traditional buildings and cultural heritage. One way to encourage and support others to protect the NP is to reward and celebrate them when they do and highlight them as a good example to others too.

Faith says: "The EQM criteria give organisations a structured way to set out their environmental and sustainability achievements and future goals and to keep making progress. Regular visits from an auditor provide a fresh pair of eyes, and the motivation and accountability to push forward. Organisation that successfully achieve the EQM award are celebrated at a special awards ceremony,  have use of the logo in their marketing materials and are used as examples of best practice by the National Park Authority. All businesses should be encouraged to march forward into a better future and that is what EQM offers.”

From 2004 to 2012, Faith continued to engage with the growing number of Peak District businesses who committed to the EQM scheme and made positive environmental efforts reduce carbon emissions, energy consumption, water use and 'reduce, reuse, and recycle' waste. More than sixty businesses are in the scheme and can be viewed on the EQM website.

The EQM scheme was always intended to be self-funding and for businesses to pay an annual fee to support it. In 2012, at a time of severe public sector budget cuts, the PDNPA invited tenders for a separate organisation to run the EQM scheme on its behalf. The successful party established a community interest company (CIC) and the Environmental Quality Mark CIC was born: a not-for-profit company that still now runs the EQM scheme as a social enterprise. Faith parted ways with the National Park Authority and became a director of the new CIC.

Operating as a CIC gave Faith and her colleagues the freedom to do additional work linked to the founding environmental, social and economic principles of the EQM scheme. Faith now has specialist experience in carbon foot-printing, helping businesses to better understand their carbon emissions. She has also recently developed an online Net Zero tool – enabling businesses to calculate how much carbon they are emitting currently and then to project their emissions reductions into the future to see when and how they could achieve net zero carbon emissions. The tool is designed to be simple, to make the cuts in carbon emissions we all need to achieve real and understandable. 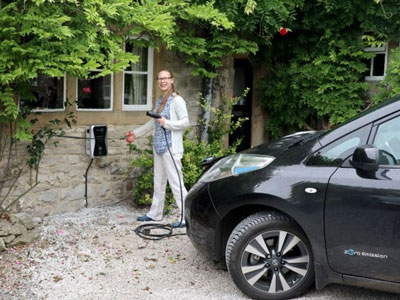 Unusually, Faith is a triple bottom line auditor, which means that she looks at organisations’ environmental performance, as well as their people management and financial performance. The EQM scheme incorporates these three elements and in addition includes a requirement to protect, enhance and celebrate the special qualities of the Peak District National Park. This auditing experience has opened other opportunities for her too, including in 2013 when she was asked to participate in the international pilot of the World Fair Trade Organisation’s (WFTO) newly developed Guarantee System. She is now the UK auditor for the WFTO.

Talking about hopes and fears for the future, Faith says: "I have real concerns that our precious, vulnerable Peak District environment is experiencing and increasing number of fires, floods, droughts and crop failures, and that soon it will change beyond recognition. Science-based predictions from organisations such as the World Wildlife Fund suggest there will be no butterflies for my teenage nieces to enjoy when they are in their 40s like me - because our global leaders aren’t acting fast enough to ‘turn the boat around’. We have less than nine years now to make the ‘rapid and unprecedented’ cuts in carbon emissions that the Intergovernmental Panel on Climate Change - the IPCC - says should be in place by 2030. I don't see the kind of action that will enable us to achieve this goal.

"My hope is that we will achieve what we need to achieve, in time. I put my hope in those two sections of society - firsly those who turn out in torrential rain to demonstrate like the 100,000 people alongside me at the COP26 global day of action in Glasgow; those like Benny Rothman (one of the Kinder Mass Trespassers) - the people who express their outrage, we all need to join in with. But secondly I have hope in the modern-day Ethel Haythornthwaites (an early campaigner for National Parks) - the diligent people, working quietly behind the scenes on solutions for a low carbon future, to make sure structures are in place for business and society to change and thrive. I pin my hopes on all of them. I was at COP21 in 2015, amongst the thousands of people from around the world demanding climate action, out on the streets of Paris. There were indigenous people from disappearing forests and sinking islands. There were people from droughted nations whose rains and crops are failing. We marched holding red ribbons to symbolise the red lines that world leaders had already crossed allowing carbon emissions to increase unabated. We laid red flowers on the ground to commemorate those that had already died through climate change related catastrophic weather events. And beyond all hope, those working fervently within the COP UN summit drafted the Paris Agreement, which is now a legally binding international treaty on climate change. As set out in the Paris Agreement, we need to limit global warming to 1.5 degrees Celsius, compared to pre-industrial levels.

"Climate change is affecting everyone, wherever we live. We all have to act. The landscapes and habitats we all love cannot survive the more extremes of heat, cold, drought and wet weather so we must do what we can. Peak District villages that experience flooding are already being buffeted by these extremes. But, we have to be optimistic, we have to be believe it’s possible. We have to get there - to not get there is unthinkable."