Born in East Anglia, Roly enjoyed a 20-year career as an award-winning daily paper journalist before joining the National Park staff as an information assistant in 1975, editing the quarterly magazine Peak Park News, and writing the first popular guidebook to the Park, First & Last, in 1978. He returned to journalism on the Birmingham Post & Mail, winning the Fison's Agricultural Journalist of the year in 1983, which resulted in a travel scholarship and comparative study on farm tourism in Bavaria and the Peak District.

He came back to the National Park in 1984 as head of information services, where he became known as "Mr Peak District". He was closely involved in the National Parks Awareness Campaign (1984-87), which culminated in his organisation of the Festival of National Parks at Chatsworth in September 1987.

As Head of Information Services with the National Park Authority (1984-1997), he was responsible for a full-time team of seven, including the design team, at the National Park headquarters, and a staff of two full-time and about 30 part-time information assistants and cleaners at the eight visitor centres. 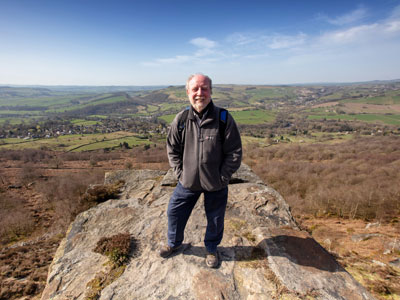 He took early retirement from the Park in 1997 and continued with freelance journalism, editing and travel writing. He has edited ACID the popular archaeological magazine produced by the Park and Derbyshire County Council since 2008 and been a member of the Peak District Local Access Forum since 2018.

His 'love affair' with the Peak District started on a school youth hostelling holiday in the 1950s, shortly after it became a National Park. Numerous walking visits followed, including his first memorable encounter with Kinder Scout in the early 1970s.

He has always been fascinated with the fight for access to our countryside, hence his involvement with the Spirit of Kinder events. He was privileged to have known Benny Rothman, leader of the 1932 Mass Trespass, as a friend, and walked the trespass route with him. He also walked parts of the Pennine Way with its creator, Tom Stephenson, who was also his friend and mentor.

Roly was recently described by a reviewer as "one of Britain’s most knowledgeable countryside writers" and is a freelance writer and editor and the author of over 90 books on walking and the countryside. He is vice president and an honorary life member of the Outdoor Writers’ and Photographers' Guild, a member of the British Guild of Travel Writers and a Fellow of the Royal Geographical Society.

His latest book, Walking Class Heroes (Signal Press, 2020) celebrates the 20th anniversary of the CRoW Act and profiles 20 pioneers of the right to roam, from John Clare to Fiona Reynolds, including Benny Rothman and Tom Stephenson.