Andy Brooks has explored some of the world’s most breath-taking landscapes but insists there really is nowhere quite like home.

Five years ago, fell runner Andy left behind a corporate career in the railway industry to achieve a long-held dream.

He founded Peak Running, a social enterprise aimed at inspiring and supporting people to improve their physical fitness and mental health by getting out for a run in beautiful surroundings - particularly in and around the Peak District.

Andy explains: "Peak Running is underpinned by a strong desire to equip people with not just the physical capability to achieve exciting things that are beyond their own expectations, but also the knowledge and skills to experience the hills and moorlands responsibly – keeping safe and leaving no trace."

As well as coaching and guiding individuals and groups on runs, Peak Running organises a number of running events. 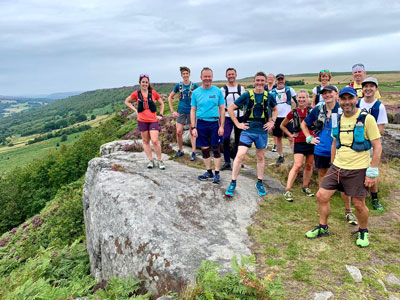 It is also one of the Peak District National Park Foundation's Peak Partners and raises funds for the Foundation through its activities. In Spring 2021, Peak Running organised the 'Run for the Birds' virtual running/walking event, which raised £4000 for the Foundation, to support conservation work on the Stanage North Lees estate.

Peak Running brings together Andy's passions, allowing him to share the benefits of the outdoors with others.

He says: "The first 30 years of my working life were spent in the railway industry, ultimately as a director in safety and operations on various networks, both in the UK and overseas.

"For most of those years, fell running was my escape from the stresses and strains of a high-pressure job and getting out into the Peak District for a run was always something I looked forward to.

"I was never sporty as a kid and didn't discover that running could be fun until my mid-20s - and that was almost by accident as I was just trying to get fit to climb a mountain!

"Since then, I have taken part in hundreds of races, over distances ranging from less than one mile to over 100. And, while I’ve enjoyed all kinds of events, I found that the joy of exploration and adventure in wild places was the biggest factor in enabling me to achieve things beyond what I ever believed I was capable of.

"Along with two friends, I hold the record for running the length of Derbyshire - 100 miles from Wessenden Head in the north to Clifton Campville in the South. A non-stop, mainly off-road run over the highest and remotest parts of the Peaks, taking 31 hours and 23 minutes."

He adds: "Over the years, I’ve been lucky enough to travel to many different parts of the world, as well as the length and breadth of the British Isles. I’ve always taken my running shoes with me, because getting out for a run is a great way to explore wherever you are.

"I’ve explored vast deserts, huge mountains, tropical rain forests, deep canyons, historic cities and rugged coastlines. There have been countless spectacular things to see, and I’ve had many memorable adventures. But, something that all the travel has made me realise is that there’s actually no better place on the planet to get out for a run than the Peak District!

"There are places with bigger mountains, more extreme landscapes and better weather! But I haven’t found anywhere else that has so much beauty, so much history and so much variety in such a small and accessible area. In that respect, I feel that the Peak District National Park is unique.

"I love that it has remote, wild areas which, even on a (rare) sunny bank holiday, can make you feel like you’re the only human on the planet, while being only a parkrun distance from a major city.  I love that, even on a relatively short run, you can enjoy a wide variety of terrain.

"With a bit of careful planning, a couple of hours of running in the Peaks can take you along high rocky edges, across remote moorland, through spectacular canyon-like dales, past historic stately homes, around picturesque lakes and into picture postcard villages.

"Sharing the joy this brings with others, and helping them to achieve things beyond their own expectations, is something I realised I found immensely rewarding, perhaps even more so than my own running." 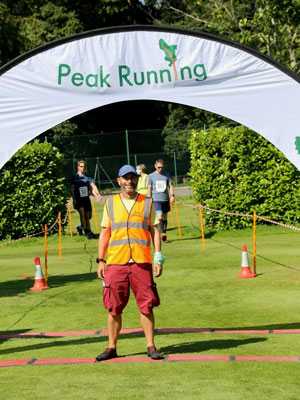 It was a serious injury, nine years ago, which laid the foundations for Peak Running. Andy recalls: "Running and exploring the Peak District were taken away from me for a long period following a freak accident in 2012. This put a fresh perspective on life and gave me an even deeper appreciation of how important running and exploring were to me - for both physical and mental wellbeing.

"So, in 2016, I finally took the plunge into something I’d dreamed about doing for many years. I changed path, began to step away from the corporate world of the railways and set up Peak Running.

"I was brought up on the edge of the Peak District and some of my earliest memories are visiting Chatsworth as a child. While I’ve worked and lived in many places, and spent spells living overseas, I've always felt a connection with the area. And I love seeing the 'wow' moment on the faces of people that are exploring the area for the first time on one of our runs.

"Organising events and partnering with the Foundation has given me a deeper understanding of the challenges faced by the National Park Authority and other stakeholders in protecting the Park and it’s delicate landscapes for future generations. Passing on that understanding to others through our activities and doing our bit to protect the National Park’s environment is something that’s really important to me."

Find out more, visit the Peak Running website at or email info@peakrunning.co.uk.

You can also learn more about Andy's favourite places in the Peak District.