In 1954, Fred hosted warden briefings at the pub too, later these were held in Cooper's Café behind the Post Office. He was a contemporary and friend of Tom Tomlinson – the first National Park warden who used the Nag’s Head snug as his base.

Fred Heardman was a mine of information for ramblers and climbers, an experienced guide and a mountain rescue organiser, and wrote walking guidebooks too. He had the nickname 'Bill the Bogtrotter'. 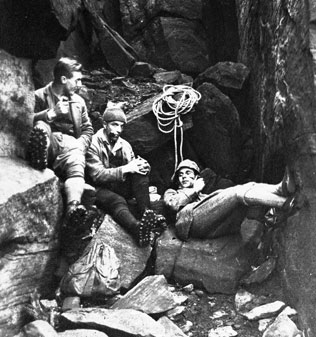 For 15 years he held both the licences for the Nags Head and the Church Inn, which resulted in an amusing story when a drunk was refused a drink at one pub and so staggered to the other, only to be thrown out by the same landlord! The Nags Head pub is the start/finish point of the Pennine Way National Trail, the 250-mile long distance walk to Kirk Yetholm, in Scotland.

Fred retired in 1960 and was awarded the BEM in the same year. He died in 1973. There is a plantation, near Edale, named Fred Heardman's Plantation.1926 created the Colne to Rowsley ramble - 73 miles.

1951 - Fred was on the committee that formed the Peak District National Park.