Felicity, or Flick as she is known, started riding at the age of five, introduced to the sport by her grandfather who was a keen rider. Horse riding is her lifelong passion, she has dedicated hours of training herself and her horses for endurance riding, completing rides of up to 80 miles, both nationally and internationally.

Originally from Wilmslow, Cheshire, Flick moved into the Peak District National Park thirty years ago, first to Rainow, on the edge of the Dark Peak, and then to Ballidon, in the White Peak.

She says: "Riding in the National Park is totally different, it’s hillier than Cheshire for a start so I found that my training for the big rides was higher quality - it was easier to get fit.

"The great thing is that there so many places to ride in the National Park and you can choose routes with less traffic. The landscape is wonderful to ride through in all seasons." 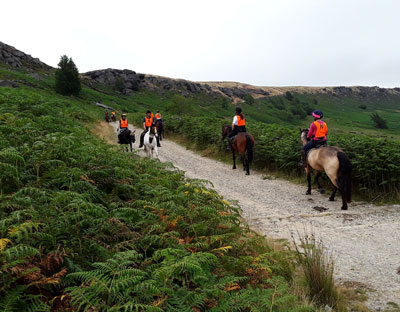 Riding routes are of great interest to Felicity and she these days finds herself spending more time researching historic Tithe Act and Enclosure Awards maps and documents to identify bridleways than actually riding them. As a member of Peak Horsepower and a former member of the Peak District Local Access Forum, she is keen to find and register bridleways on the local Highways Authority's Definitive Rights of Way map.

Flick says: "I am lucky to live in an area of the National Park that is blessed with old drover’s routes and I’m close to the High Peak and Tissington Trails, so I can easily avoid riding on tarmac. But not everyone has this kind of riding network on their doorstep. That’s why across the country horse riders are on the countdown to 2026 for registering bridleways based on historical evidence.

"It’s fascinating research and because Derbyshire Records Office has made a lot of information available online I have been able to get on with it during the pandemic lockdowns.

"I always walk the routes I’m researching too, it helps to make sense of them on the ground. I sometimes talk to farmers and they are often interested to learn about routes that sometimes pre-date their farms.

"It’s really important that we don’t lose these old ways. When you look at what traffic-free routes are available to riders there are far less in comparison to walkers who can ramble on open access land as well as on footpaths and bridleways. So I am researching these old bridleways to ensure they are not lost forever. I see it as my contribution, a kind of legacy, that I can leave for horse riders in the future."

Felicity has found new friends in people doing similar research and also has given talks to interested groups. She says: "My interest in the routes has come from organising rides for Endurance GB in Derbyshire. It’s been good to share the knowledge and introduce riders and others to the Peak District."

Another project dear to her heart is her "Park and Ride" plan, which identifies car parks within the National Park which are suitable for horse boxes and trailers. Her aim is to list facilities at each site and promote a safe riding route, with a map, which can be ridden from the car park.

Flick says: "Horse riders need to know in advance what facilities there are and that there is a definite route for them.

"The National Park is a brilliant place to ride because of its variety of terrains and routes - you could go somewhere different every day - and it’s lovely to ride along and see the history of the place in the landscape. I always finish a ride feeling better in myself - it's definitely good for your mental and physical wellbeing. I hope riders will be enjoying it as much as me in the next seventy years."