Ken Parker worked for the Peak District National Park from 1972 to 2008. He started as a landscape architect doing the first Landscape Character Analysis and drafting new conservation policies in the first Structure Plan. He was principal witness at Public Inquiries into mineral extraction which shaped national and local policy. He developed new working relationships with organisations concerned with rural land management and implemented a partnership approach to ‘resource based’ area recreation management - notably in Dovedale and the Upper Derwent. He recognised the vital role of local businesses and local communities who actually own the land that National Park designation seeks to conserve. 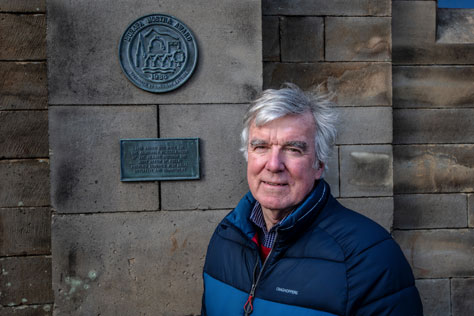 In 1979, he initiated the Integrated Rural Development (IRD) Project with others in Monyash, Longnor and Derwent. Working with local communities this pioneering project tested new approaches based on ‘the three Is’ - active involvement of local people, responding to individual local circumstances and integrating social, economic and environmental objectives. The project report ‘A Tale of Two Villages’ won national and international recognition. The IRD project pioneered a completely new approach to rural development and is the only project in the Peak District to win a Europa Nostra award (pictured). The systems tried in the Peak District 40 years ago are now the basis for many rural programmes.

In 1985, Ken was promoted to Director responsible for conservation and land management. In 1995, he won a Churchill Fellowship to study 'Community-based Countryside Conservation' spending two months in Austria and France. This experience shaped the rest of his career; devising and managing a series of pioneering projects. The £3.75 million ‘New Environmental Economy’ (2002-2008) created new products and services that used Environmental assets as a key element in stimulating growth in the local economy. Environmental benefits were created as a key by-product of an economic development project. It engaged 625 different businesses and helped many to develop new products and services. New collaborative marketing initiatives were set up, including a place-based environmental accreditation scheme (Peak District Environmental Quality Mark) and a network of new Farmers' Markets.

Ken said: "The high quality environment of this ‘Living Landscape’ is the result of the actions of generations of local people - the villages, farms and moors are their creation. Encouraging and supporting local people as the true custodians of the Peak District environment is a distinctive role for the National Park Authority."