Elin Price is a National Park cultural heritage volunteer. Discovering the past through archaeological investigations and historical research is her passion. She is also a professional artist, but more on that later.

Originally from the Yorkshire Dales, and following a few years down south where she did a one year Art Foundation Diploma at Farnham and then went on to gain a degree in archaeology at University College London, Elin moved to New Mills in her mid-twenties with her partner Steve. He is part of the local Kinder Mountain Rescue team and works as a joiner. Having been transplanted south along the Pennines from where she started, Elin was pleased to find many similarities between the Yorkshire Dales and the Peak District.

She says: "Being at either end of the Pennines' spine, both places share similar geology and feel connected to me. As I grew up in a beautiful, historic, rural landscape I think I was looking for that when settling down as an adult - I've just moved to another part of my home patch. 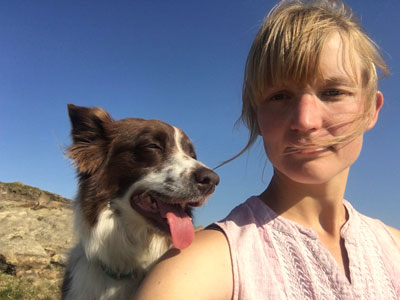 "I have a dog and love to go out walking, I’ve enjoyed getting to know the Peak District, discovering places and becoming inspired to explore it further through archaeology and art.”

In 2019, she completed her Master’s degree in Landscape Archaeology, from Sheffield University. The university's archaeology department had many links with the Peak District National Park and studies included visits to and practical activities at some of its archaeological sites. Through her studies, Elin's interest became properly piqued as she dived into applied work such as examining soil samples, research, reading old maps, writing reports and learning site measuring techniques. So, when the degree course demanded a work placement, Elin reached out to the National Park Authority’s cultural heritage team. Part of her placement work involved doing Level 1 surveys at Cracken Edge Quarry, near Chinley. 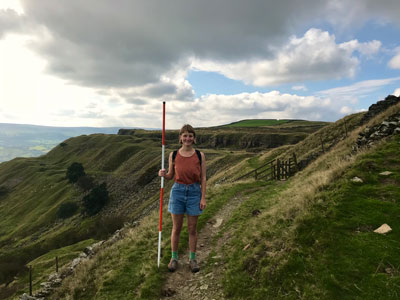 Cracken Edge is a dramatic scarp-edge quarry, and its importance is recognised in its status as a Regionally Important Geological Site (RIGS). In the past, the quarry specialised in producing flags and slates for paving and roofing.

Elin's research has revealed that the site was quarried from at least the 1600s, when local shareholders held ownership. By 1800, Cracken was a substantial enterprise employing many local men. In fact, her survey identified 59 features including structures, mine adits and machinery, highlighting the once industrious nature of this interesting site, which is now a popular place for a walk.

Elin explains: "What I did was to identify and record features on the site. This included noting their location, measurements and condition and taking photographs. I also carried out a desk-based assessment which involved examining historic material such as old maps, accounts and photographs and discovering previous research to try to find out more about how and when the site developed. Local historian Derek Brumhead, in particular, had done some amazing and useful research into the area that was essential to my report."

For Elin, it has been particularly satisfying to see how much interest there is in her findings from local people. She gave a talk about Cracken Edge Quarry at the online Derbyshire Archaeology Day in 2020 and received emails afterwards from people whose families had lived and worked there. She says: "It's lovely that there are still memories around of the site being worked and to get more information and feedback is wonderful. It could easily have become a funny little forgotten corner of the High Peak so I’m happy it’s caught people’s attention."

Elin is especially interested in working to make archaeological sites more accessible and understandable to people and has produced a 'story map' for Cracken Edge. This is available online and uses maps and photographs to illustrate Elin’s findings and reveals the story of the site's past.

Elin would like to delve further into the historical records to uncover more stories about the place. She says: "There are a numbers of things I would love to do, such as looking into the Tithe records and also local graveyard records to see what they reveal. I have been told that there are some old houses in the area that have stone floors made from huge two-metre square slabs from the quarry - I would love to see and photograph these. And, although I have surveyed the surface remains of the site, looking at the mines themselves would offer more information into the history of site and it would be very exciting to go down there.

During her time with the National Park team, Elin also conducted surveys of farmland to add to information to the archaeological records.

Elin says: "One of the nice things is meeting interesting people along the way - working with local historians like Derek Brumhead, or talking to farmers and landowners about features on their land. People deserve to discover and understand all they can about the area."

In addition, Elin has greatly enjoyed being part of the team studying the past at Under Whitle Farm, in the upper Dove valley. Excavations and research have been taking place over a number of years there through the Tudor Farming Interpretation Group and the Digging Deeper project.

Elin says: "There is a thrill to discovering the past and finding things that reveal something of past experiences. I suppose I’m always looking for the stories to be told.

"Cultural heritage is part of how we see ourselves - part of our personal identities, not just local or national identity. Understanding what has gone before is important in getting to grips with where we go to next. I think it’s important that remnants of human lives and endeavours are looked after and valued and found interesting.

"The Peak District is such an interesting area with its variety of upland, plateau and lowland landscapes and its industrial and agricultural history - as a case study it has something from every period. It’s also quite unique in its positioning encircled by towns and cities. The Peak District is there for everyone! I hope more people, visitors and locals, will enjoy discovering it and not by just going to the obvious places - so get your map out, be curious, go exploring, find out about places and fall in love with the Peak District too."

Elin's artwork reflects her appreciation of the Peak District National Park’s special qualities. As a professional papercut artist, her intricate work is inspired by the wildlife and landscape she experiences. Her beautifully detailed pieces are all drawn and designed by Elin and hand cut with a Swann - Morton scalpel. You can see her work on Instagram. 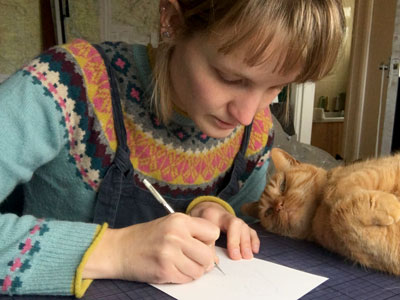 "I have spent my life immersed in nature and I constantly seek more knowledge of the world around me which inspires my pieces. I tend to explore nature and the stories we have formed through our relationship with it as well as traditional folk stories, historic art styles from different times and places, and vernacular art and motifs."