From the walking group which inspired a critically acclaimed nationwide theatre production to an environmental charity recently recognised in the government's Green Recovery Challenge, he is dedicated to improving representation in the countryside.

Maxwell arrived in the UK from Ghana in 1996 after being awarded a scholarship to study journalism at Cardiff University. He went on to complete a Master of Science degree in Environmental Management at Sheffield Hallam University (SHU) and became an Associate Lecturer/Research Associate at SHU.

In 2004, Maxwell co-founded the walking group, 100 Black Men Walking for Health, initially as a means of promoting healthier lifestyles for middle-aged men. The group ultimately became the inspiration for the play Black Men Walking, an Eclipse Theatre Company and Royal Exchange Theatre co-production. The play received rave reviews across the UK in 2018/19 and brought issues of representation in the countryside into the spotlight.

Maxwell was the first black person to serve on the board of Ramblers Association UK (2005-09) and was a member of the Peak District National Park Equality Comprehensive Audit Standards Committee in 2004.

He is the founder and co-ordinator of the Sheffield Environmental Movement (SEM), a charity formed in 2016 to promote access to and participation in the natural environment for people from black and ethnic minority communities. Actress, author and activist Joanna Lumley recently became its patron.

SEM is one of 68 organisations to benefit from the government’s £40 million Green Recovery Challenge Fund, receiving £62,600 for its work reconnecting Black, Asian, Minority Ethnic and Refugee (BAMER) communities to green spaces for health and wellbeing.

The Green Recovery Challenge Fund - run in partnership with Defra and The National Lottery Heritage Fund - is part of the Government's 25-year environment plan. Its aims include protecting species, finding nature-based solutions to tackling climate change and connecting people with nature.

Maxwell’s work has also been recognised locally. In December 2018, he was named a Community Champion in the Moor Pride in Sheffield Community Awards, which celebrate the city’s unsung heroes.

Earlier that year, Maxwell explained his philosophy in an interview with the Peak District National Park’s ParkLife magazine. 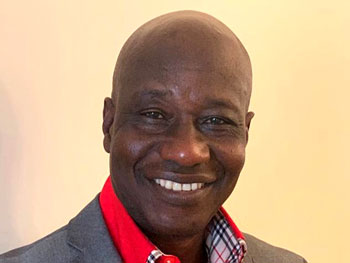 "There’s so much written in academia and policy documents about the lack of participation in the environment by minority groups," he said. "But policy alone doesn’t bring about the desired change. To do that, we need people with passion and commitment who are willing to change perceptions.

"Walking has to be promoted as an attractive hobby, a positive experience. As the message gets around, more people will become enthused and motivated. That’s where the sea of change will begin."

Maxwell has published numerous academic papers, is regularly involved in media work and has served on a number of local and national boards and committees, advising on equality, diversity and inclusion.

He is currently studying for a PhD in Black Studies at the Department of American and Canadian Studies, University of Nottingham and was last year awarded an Arts and Humanities Research Council (AHRC) scholarship through Midlands4Cities Doctoral Training Partnership. His research interests focus on race, ecology and environmental justice in the UK and on the genealogy of people of Black African ancestry in the natural environment in the UK from the Roman times to slavery, colonialism and post-colonialism.