Mark Gwynne Jones is an award-winning poet and recording artist who lives in the Peak District, close to the National Park. Mark grew up on a hill farm in the 1970s and 80s between Matlock and Chesterfield and spent time playing outdoors, scrambling around woods and disused quarries. He also learned to be quiet and get close to wildlife. He says it is the landscape that has kept him in the area.

Mark has published five collections of poetry and appeared in numerous anthologies. Currently Mark is creating a soundscape called Voices From The Peak to celebrate the 70th anniversary of the Peak District National Park.

He said: "During 2020, the National Park and the great outdoors have been more valuable than ever, so I hope these recordings will bring the magic of the Peak District to those who may not be able to visit. I want listeners to be transported to another world in Voices From the Peak. The atmospheric music coupled with the field recordings, interviews and archive recordings have really made this possible."

The Voices From The Peak project is funded by Arts Council England, and features the magical soundscapes, music and hidden narratives of the Peak District, with contributors spanning from Peakland hill farmers and miners, to poets, astronomers and even renowned musician Ashley Hutchings of Fairport Convention.

"When I’m in the landscape I enter another language." 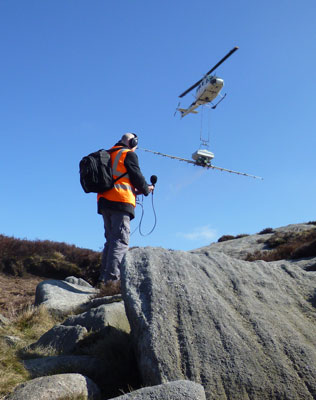 Mark said: "I love disappearing into the landscape, becoming part of it. We live within our opinions and analyses, but when you’re out in the landscape you enter another language – the colours, the sounds, the textures of the land, it goes beyond the everyday. When I’m working with schools we do a listening exercise. We sit in a circle and silently count on fingers how many sounds the students can hear. Some will hear four or five, some hear more. It’s a listening meditation that people can try for themselves."

You can read the full interview with Mark Gwynne Jones in ParkLife 2020.

Listen to Voices From The Peak – headphones are recommended (but not essential).