After the second world war, Tom Tomlinson and his wife Hilda ran the youth hostel at Edale for eight years before he was appointed as the first National Park warden.

He was appointed in 1954 and walked the moors of Kinder Scout and Bleaklow every working day for nearly 20 years. His job included helping lost or injured walkers off the mountain, preventing vandalism and aiding farmers to recover sheep buried in the snow. As the other National Parks were established the new wardens would visit to find out how he did the job.

When he took the job he was told he would have to walk about twenty miles a day mostly on the moors above Edale. The National Park offered him a motorcycle as transport but he argued that he would not be able to get an injured person to hospital on a motorcycle. Eventually he was provided with a Land Rover. 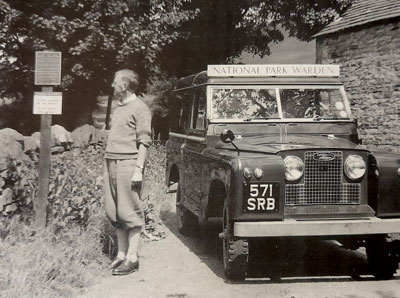 "Tom was truly an original and great ambassador for the national park throughout his long life. The many thousands of countryside rangers in Britain today owe everything to his pioneering work." Councillor Norman Wilson, Vice-Chairman, Peak District National Park (1997).

A voluntary warden service of part-time volunteers (from ramblers clubs) was also created in 1954 – the volunteers wore a green armband to denote their role. In the first year of the service, 500 volunteer attendances were recorded from 22 different organisations. Briefings took place in a room at the Nag’s Head, Edale, where landlord and access campaigner Fred Heardman had also set up the first information service in the snug. Later the wardens’ briefings moved to the legendary Cooper’s Café in an old railway carriage behind the Post Office.

Tom worked as chief warden for fourteen years, by 1963 there were 120 part-time and full-time wardens (which meant he got involved with a lot of administration).

In 1968, he took the newly created post of youth liaison officer.

He retired in 1973. To mark the occasion a tea party was held at North Lees Hall attended by Peak National Park representatives, county councillors and national park wardens. He was presented with a folding shooting stick with the inscription ‘To Tom with deep affection’.

He continued working with and helping educate children about the national park and the countryside until frailties and blindness prevented him from doing so.

In his spare time, Tom Tomlinson also served as clerk to both the Hathersage and the Outseats parish councils, for more than twenty years.

He was one of the founding members of and secretary to the Hathersage Historical Society for twenty-eight years.

He went to extra-mural lectures on history and archaeology, and carried out his own researches in the Sheffield City Library and the County Records Office at Matlock. He wrote more than 20 booklets with titles such as ‘The Mills of Hathersage’ and ‘Querns, Millstones and Grindstones’. They were used in local schools.